Dianne Romain, philosophy professor turned fiction writer, lives with writer Sterling Bennett in the house she designed in Guanajuato, a colonial city smack in the center of Mexico and the site of her novel The Trumpet Lesson.

Dianne grew up and went to college in Missouri before moving to Berkeley for graduate school. After completing her Ph.D. in philosophy, she stayed in California, teaching at Mills College, U.C. San Diego, and Sonoma State University. She also taught philosophy and yoga to prison inmates during a year’s sabbatical in Mexico.

Dianne credits the narrative style of her philosophical talks and writing to years of practicing fiction techniques in a class that morphed into a women’s writing group. In Mexico Dianne studied with critically acclaimed novelist, María Luisa Puga. When writing The Trumpet Lesson, she worked with writing coach Sarah Lovett and with literary editors Erin Ferris and Mark Sander. To get to know her trumpet-playing characters, she took up the trumpet herself. Her fluency in Spanish and French also informs her writing. Dianne is devoted to fiction, but, ever the philosopher, has continued to mentor graduate students at the University of Guanajuato.

Whether practicing philosophy or writing fiction, her goal remains the same: blending compassion, analysis, and humor to lighten the humbling path toward wisdom.

Dianne performs for a group of her fans. 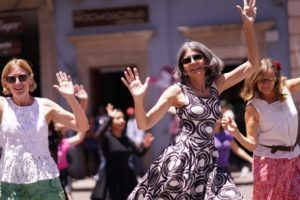