At the blast, Callie Quinn startled and looked up from her rooftop terrace to see a puff of smoke high above her head. She turned, still shaken, toward the houses that stair-stepped up the opposite side of the ravine and focused in on the lime green one. Had Armando seen her?

She steadied herself. Soon another celebratory firework rocket would take off from the chapel, streak over her rooftop terrace, and explode above Guanajuato’s historic center. She imagined that rocket catching the sheet she was hanging, lifting it and her along with it. How she would soar through the sky! Exhilarating. She looked down to the floor of the canyon, where pedestrian plazas nestled among soft-hued colonial buildings. Exhilarating, yes. But a long way to fall.

No answer. Armando Torres flipped his cell shut, paced back and forth across his studio, and then sat on the stone ledge of a tall, deep-set window. He patted a salsa rhythm on his conga. Quick, quick, slow. Quick, quick, slow. No response. None at all. He thumped the conga. He hadn’t been able to reach his love Claude in Paris, and now he couldn’t reach Callie. But at least he knew where she was. He tapped a drum roll. Doing her laundry. Which she should be leaving to Doña Petra. Why have a cleaning woman, if she wouldn’t let her clean?

He gave the conga a final pat and turned to peer across the ravine’s patchwork of houses. There she was on her rooftop stretching toward a billowing sheet. It looked like she had a scarf tied around her curls. He leaned out the window. Could it be the silk one Claude had helped him pick out the summer before in Paris? In green to match her eyes, the scarf was perfect for her. He had told her that. Not that it made a difference. She never wore it when they went out. He had even suggested that gentlemen might show her attention if she wore it. Not that they hadn’t checked her out before. Not surprising. She was nice to look at. And young looking. He turned to look at himself in the mirror. Well, not as young looking as he was. He leaned toward the mirror, patted his curls, and then stood back to look again. Of course, he looked young. He pulled himself up to his full six feet. He was only thirty. Same as Claude. And she was… goodness… maybe fifty! Anyway, he wouldn’t mind if she went out. Once in a while. Still, he hadn’t said anything about men paying her attention, until he had given her the scarf. The next time she’d met him for dinner, she had covered herself in beige, including a muffler wrapped around her throat and curls, as if she were a mummy. He shrugged. Ni modo. Never mind. So she wore his gift to do the laundry. At least there on her rooftop she wasn’t afraid to live.

A rocket shot up from the chapel below Callie’s property. He watched her jump when it blasted. Then he turned to take in the poster over the foot of his daybed, the one of Claude bowing his cello. “Claude,” he whispered, “where are you?” He looked for help from his statue of the Virgin de Guadalupe. Recalling the nuns saying that rocket blasts open the skies for prayer, he crossed himself and made a wish.

When the next rocket took off, he turned to watch Callie startle again at the blast. He shook his head. Five years in Guanajuato, and she still had not learned to listen for the telltale swoosh of an ascending rocket.

He dialed her number again and called across the canyon: “Contesta el teléfono, Calabacita.” Answer the phone, Little Squash.

When she heard the phone, Callie, determined to finally answer in time, left a towel hanging from one clothespin in her rush to get across her rooftop terrace, down the spiral stairs to the entry terrace, and then through the French doors into her dining area. Still, she paused before answering, her heart racing.

When she picked up the phone, it was Armando, complaining that his maldita answering machine had garbled the message his Parisian love had left the night before and, on top of that, he hadn’t been able to reach him all morning. Then he scolded her for hanging her laundry. She would be late meeting him in Plaza Mexiamora to search for Tavelé.

Claude would call back, she told him, and she would get to Mexiamora on time. That is, she said to herself when climbing back up the stairs, if she didn’t have to go looking for a towel that had blown away.

She hurried to finish attaching the towel, knowing the phone would ring again. Armando never seemed to complete a conversation in one session or even in two. Three was the charm of Armando. She’d first experienced that habit of his when he appeared at her terrace door wanting French grammar lessons. Caught in the middle of her Saturday chores, her hair full of dust and her books in a pile, she had been reluctant to take on a French student, even one with an endearing Parisian accent. She had more than enough work as a translator. And, besides, she felt uncomfortable around strangers. After she’d turned him away as politely as possible, he’d knocked again, saying he’d forgotten to add that he was an emissary from her aunt Ida. Still, she had resisted. And so he went away, only to knock again a moment later. “But I haven’t told you why I must study French grammar.” He slipped a couple of sticks from his shoulder bag, tapped a drum roll on her door, and said, “Pour l’amour, Madame Professeur. Pour l’amour.” A young man who wanted to learn grammar because of love. Well, what could she have done but invite him in? And so she had taught him grammar, and he had carried out her aunt’s mission of getting her out of the house, often to search for Tavelé, that rascal street dog he had adopted, and who had, for the umpteenth time, run off, as usual on a Saturday afternoon, giving them an excuse for a Sunday walk. Not that she needed an excuse to spend time with Armando, whom she held dear, as much, she knew, because of his irritating fits as for his charm.

She had just finished pinning the towel when the phone rang again. This time she answered right away, still out of breath from her rush to the phone.

Armando began by teasing her about jumping at rocket blasts. “How about,” he said, “learning to listen for the take-offs by the twenty-first century? That would give you two more years.” That’s why he had called, he said, and then, trying to make it sound like an afterthought, he asked her, not for the first time, to call Paris hospitals. “Claude must have slipped into the Seine. Or tumbled from la Tour Eiffel. Some awful accident. Like the ones that killed your husbands.”

She tried to calm him down. “But, remember, my husbands and their accidents are fictional.”

He continued as if he hadn’t been listening. “And all of them dead before giving you a child. Quel dommage. What a pity. No children. No grandchildren to play with.”

Her heart began to race. No child. No grandchildren. He had never come up with that before. “Armando, you’re getting carried away. Perhaps I should stop telling the stories.” Her voice sounded shaky. Would he notice?

“No, no, no, no, no. J’adore tes maris.” He loved her husbands, he said, switching into French, as he did when he wanted to impress something on her. “Don’t I pray for their souls? And, besides, your stories aren’t giving me ideas. Accidents happen all the time in real life, as you must know, given your warnings about what could happen to Tavelé if I don’t start keeping him on a leash. And Claude? What has happened to him? Is he dead—or something worse? I’d rather not know.” So Armando said and hung up.

Callie stood looking into the receiver. Something worse than death? She shook her head. Funny. She replaced the receiver. And yet not so funny. Armando once again imagining Claude with another man.

She had just opened the terrace door when Armando called again, this time wanting to know how she had gotten to the phone so quickly the time before. “You have no business rushing down a spiral stairway. You might fall, and there you would be, alone, crumpled on your terrace. How could you do that me?”

Church bells rang while she put the laundry basket away and wiped the washer. The bells had started at dawn. As had the drum and bugle bands. And the rocket blasts. In celebration of some saint’s day. She didn’t know which one. The only festival day she knew for sure was December 12, Guadalupe Day. On that day, she would take time off to watch the children—the boys dressed in white and the girls in colorful skirts and embroidered blouses—walking hand in hand with their parents up the hill to the temple of Guadalupe, carrying baskets of fruit for the Mexican Virgin.

She went to the railing and looked again toward the house where Armando lived. When he had described her crumpled on the terrace, she had heard him tapping, not as erratically as at his most anxious, but still worrisome. She had tried to reassure him. She would not fall, they would find Tavelé, and Claude would call. She also suggested that he talk to the Virgin, which she had learned helped calm him down, especially, it seemed, when he talked to the Virgin de Guadalupe. She thought again of the children hand in hand with their parents climbing the hill to the temple. As a little boy Armando must have celebrated Guadalupe Day, too. Someone at the orphanage would have dressed him in white, drawn a mustache on his face, and given him a basket of fruit for the Virgin. Even so, it was sad. Who would have held his hand? Still, like her aunt Ida said, there was no point in dwelling on the past. 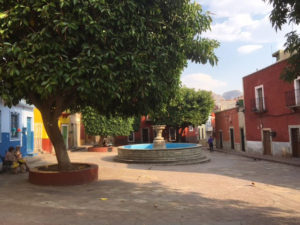 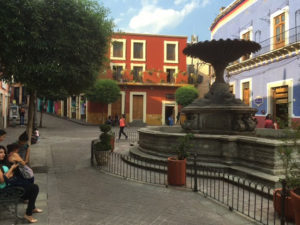 Plaza Baratillo, where Armando wonders why in the world shy and quiet Callie would ask for a trumpet lesson. 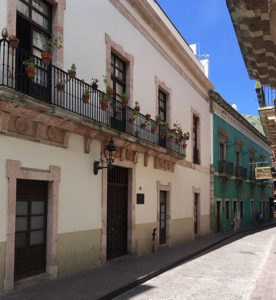 The University of Guanajuato library on Calle Truco, where Callie is headed until she sees a couple of Jehovah’s Witnesses coming toward her. 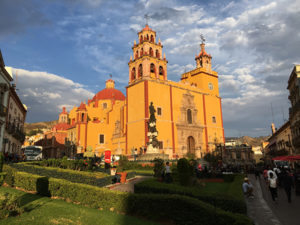 The Basilica, Plaza de la Paz, where Callie slips into a side entrance to avoid the Jehovah’s Witnesses 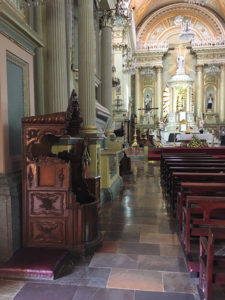 Callie plans to cross right through the Basilica until she notices an elderly woman kneeling at the confessional.

The Trumpet Lesson
She Writes Press; September, 2019
Available at bookstores and online 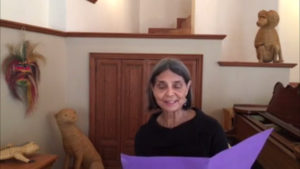 For audio and video excerpts from The Trumpet Lesson>>