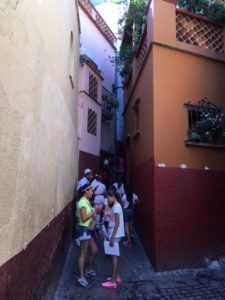 Why not riff off one of the legends set in Guanajuato’s callejones?

The legend of the Callejón del Beso tells of the tragic love between a poor miner and the daughter of a man who demands that she marry money. One night the miner climbs to a balcony opposite the house where his love lives. She sees him, runs to her balcony, and leans across the narrow callejón for a kiss. Her father discovers them and, enraged, draws his knife and stabs his daughter to death.

Today, tourists crowd the Callejón del Beso, waiting in line to smooch on the stair below where the miner and his love shared their last kiss.

Some ideas for riffing: Research the legend for more details and then alter them. Change the genders, add a vampire, create a farce.

If you would like to explore the Callejón del Beso on foot, look for it near the Plaza de los Angeles.