I began some years ago to journal about exchanges with my neighbors in the Guanajuato barrio where I live. Like all such writing the details result from memory true and faulty. In my case additional skepticism arises due to my incomplete fluency in my neighbors’ mother tongue.

The triggering incident for writing was my neighbor boy Memo’s most recent request for aid. It threw, I thought, the legitimacy of previous requests into doubt.

The incident began with our doorbell ringing several times in quick succession, the usual signal that a child stood at the door.

And, yes, it was a child. Memo. He had a surprise for me, he said. Oh, I wondered, perhaps a drawing. For Christmas he had made a drawing of Sterling and me, using paper and colored pencils we gave him. Then for Valentine’s Day he cut a paper heart, colored it pink, and wrote in pencil  “Feliz Dia de San Balentin” (“v” and “b” being indistinguishable to his ear) surrounded by four “Love”s.  Another, small pink heart cut-out was pasted to the lower part of the heart, and on it two more “love”s. On the back, also colored pink, he wrote in pencil “De MaNuel para diaNa.”

I opened the door, and he came in and took a seat on the tile stairs that go down to our sala. The entry stairs being our usual visiting place as they run along a shelf lined with books I loan to him and other Guanajuato barrio children. 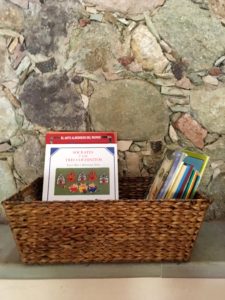 Oh, so that’s the surprise. My suspicion feelers went on alert. “Felicidades,” I said.

Then he began his story which I had him repeat several times to make sure I understood. His mother, he told me, wanted to buy him a cell phone—with a camera—for his birthday. He’s 12. She put down 200 pesos and if she did not pay the additional 300 pesos by the next day, she would lose the 200 she put down.

I thought that he did not need a cell phone and certainly not one with a camera. If his mother could not pay for the phone, how would she pay for the calls? “That’s a hard lesson,” I said. “Never give someone money unless you are sure you can get it back.” (A lesson I have yet to learn in the neighborhood, but then I have considerably more cash to dispense with.)

“Oh,” Memo said, “The first man at the store said he could get it back, but then when my mother went back there was a different man, and he would not give her the money.” He repeated: “If she does not give him $300 by tomorrow, she will lose her money.”

“Well,” I said, “That sounds like robbery. You should let the police know.”

“Oh,” Memo said, “we have already contacted the police. We still need 300 pesos by tomorrow.”

I remained silent a moment, stunned at how quickly Memo answered anything I put forward.

“Well,” I said. “What a shame. It’s too bad but I cannot help you with this one.”  I started toward the door, with Memo following.

“Do you know when Frank is coming back?” he asked. (East German born Frank and his wife, who live most of the year in the US, are the only other foreigners with homes in our neighborhood.) “He’s bringing me presents for Christmas and my birthday.”

A hint about what I should be doing?

“I think he’s coming back in April,” I said. I opened the door. “Happy Birthday,” I said, and Memo went off appearing no less cheerful than when he arrived.

How did I feel? Was I surprised? Not by Memo’s quick thinking. He’s a master of it. I was, I suppose, more surprised by myself. For once I had kept my pesos. They would be handy to give Memo another day.