Hey, I hear you’ve finished your novel. So when’s it coming out?

I finished my novel in April and began drafting, polishing, discarding, redrafting, and repolishing my pitches, agent query letters, novel synopses, and sample pages in consultation with my friend, writing coach Sarah Lovett. Ready to go, I thought.

Nope. Sarah announced that I needed an author’s website before sending out my queries. So began more tasks: writing website text, interrupting Erin Ferris and Mark Sander’s vacation to get their editing advice, recording and rerecording myself reading, taking relevant photos in the best light (shortly before sunset or after sunrise), making videos, consulting with photographer Jack Arnold who designed my site, and editing, editing, editing with my friend AJ Buckingham. AJ also took that fabulous home page photo of Guanajuato and me (I styled my hair myself).

As if that weren’t enough, Sarah suggested that, as long as I was headed to New England in August, I might as well tack on a Pitch Slam session at the Writer’s Digest Annual Conference in New York. And so began the task of researching the 68 agents and editors, looking for ones interested in poignant, yet witty contemporary women’s fiction with diverse characters that is set in a Mexican canyon city of hidden rivers and steep, maze-like footpaths. Or something close.

Oh, and then there was the conference’s webinar prep session. Seemed like a good idea to us. By then Sterling had finished his own novel and decided to sign up for the conference, too. We downloaded the webinar app and marked the day and time on our calendars, planning to listen in the quiet of our hillside home.

The day before the webinar we faced a new challenge: the Charleston Flash Mob we were to dance in at Plaza de la Paz got rescheduled to start the same time as the webinar. Our second performance was to begin an hour later. Not enough time to run home for the webinar, given the 203 stairs to our house. And so began another task: finding a quiet Plaza de la Paz restaurant with WIFI, so we could finish the 7 minute flash mob and skip off between performances to catch what we could of the webinar. (Newbies that we were, we didn’t realize we could listen to the webinar another day.)

I ran downtown to check out restaurants in the area and found a quiet back table in El Canastillo de Flores (The Basket of Flowers). They have WIFI, too. 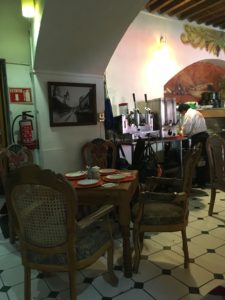 Where to webinar in Guanajuato 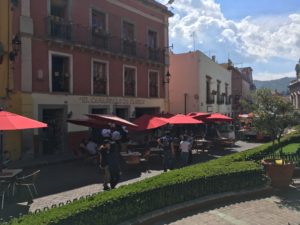 The next day Guanajuato Swing and Dedanse gathered in the plaza ready to begin the noon flash mob when … a hearse pulled up at the Basilica. And so, in deference to the funeral mass, we canceled that performance, which allowed Sterling and me to sign in to the webinar earlier than expected. Now that we’re seasoned webinarians, we know we can tune in almost any time to hear the part we missed.

With the Flash Mob and the webinar out of the way, we hoped to kick back and pack at our leisure. Wrong again.

We needed business cards for the conference. That sent me walking about town looking for places to have them made. At the first place they said it would take a week to print the cards. At the second they said it would take overnight. With only ten days to go before our departure, we chose the second place­­–just to be safe. A good thing. We spent an entire weekend using various apps to design our business cards, placing and replacing our photos, words, colors, fonts, and spaces. Then we made several return trips to the print shop readjusting the designs until they printed out right (I switched my photo to black and white when the color version turned out too yellow the first day and too red the next).

As for our pitches, we’ve signed up for a conference session on perfecting them. At the Slam the next day we’ll try them out on agents. I’ll let you know how it goes.