So how was the Pitch Slam?

That depended on the lines.

When I signed up for the slam I had learned from the conference website that the slam was 60 minutes long and that each pitch and response lasted three minutes. Wow, I thought, I can see lots of agents that way.

Not quite. When I inquired about how to sign up to see the agents I’d selected from the 70 agents on the website, I learned that there was no way to sign up for agents. Instead you would enter the slam with your list of agents in hand and look for your selected agents among those seated in alphabetical order at tables lining the perimeter of the room.

We learned the first day of the conference that around 150 writers would be in each slam. Given the 70 agents, that meant about two writers per agent. So the odds looked pretty good for seeing around 10 agents.

But on entering the room you could find, as I did, that the agents you picked turned out to be popular ones, with lines of four or five. That meant you would be spending 9 to 12 minutes waiting. With the additional 3 minutes of your pitch, you would be spending 12 to 15 minutes per pitch. In the worst case scenario you’d see at most 4 agents.

As it turned out agents sometimes dismissed writers before the full three minutes, so moving forward to see an agent went more quickly than every three minutes. But the time saved that way was generally lost wandering around the room looking for the next agent and trying to calculate whether to stand in a longer line for an agent at the top of your list or in a shorter line for an agent toward the bottom. By the end of the slam I’d gotten so discombobulated by the process that I lost my carefully prepared list.

But not all was lost. I managed to see 6 agents, and three of them asked me to send pages. Sterling also got nibbles from three agents. The best part of the conference was meeting other writers, several of whom plan to visit Guanajuato. 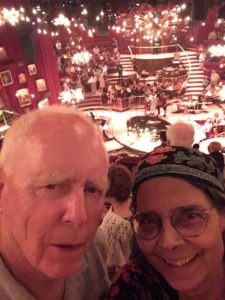 To clear our heads after the conference we went to see our friend Gelsey Bell perform in The Great Comet of 1812.  And we took a walk along the High Line Park, went sailing, and saw friends and family in NYC, Greenport, Boston, and New Hampshire.

I’ve now sent my pages, and we’re off to Swing Out New Hampshire for 5 days of Lindy Hopping. When we get back to Guanajuato I’ll start sending out queries to other agents. I expect not to hear back for some time, as agents are up to their ears with queries. My plan is to seek an agent for around 6 months. If I don’t find an agent, I’ll move on to query small presses. And, if no small press takes on my novel, I’ll publish it myself. One way or another you’ll eventually have a chance to read Catch Me if I Fall.